Working with Jean was a heartwarming, joyous experience. We took a tattered hand made quilt painstakingly made with love by mother in law 34 years ago when my first child was born. When I pulled it out to give to my firstborn grandson, I realized the years had taken their toll. It was falling apart at the seams…literally. While I could have easily tossed it away and replaced it with a store bought baby quilt, I knew this was a work of love and art by my mother in law who passed away over a decade ago. I wanted to somehow pass this on to my son’s son. Jean was exactly the person I needed. I was familiar with her work and turned to her with my tattered quilt in hand. Off she went with it to find materials to match, ways to strengthen the weak parts and fix up the tatters. She also had plenty of imaginative ideas about how to make it a strong, durable and adorable keepsake. We spent a bit of time discussing what I wanted and what became so evident was how well Jean listened and tuned in to what I was looking for. She even came up with a sweet book to go with the quilt to explain the story of it to my grandson with images of his Nanny and Pop-pop and the rest of his family. I know he will be read that book many times and the quilt will be a gift that will remind him he is love and cherished by all of us including those who are no longer here. The original quilt was a work of love that through Jean’s talents, creativity and thoughtfulness we were able to restore and pass on.  Thank you Jean!  ~ Cathy Walker
Our girls received their quilts last night. They were thrilled with them and then we showed them the surprise that you created. Both girls LOVED seeing Pappy's handwriting on their quilts. Our little one asked if she could have his handwriting put on all four corners. Thank you for the extra special touch you created for our girls' quilts. ~ Tiffany

Click on the image to read more.
​Lin’s father passed on.  After helping her mother work through her father’s clothing, Lin showed me a bag of her dad’s neckties. She shared how her dad wore one of these neckties each day over the course of his 40-year car salesman career. Lin fondly remembered each tie and especially the ties her father’s sister, Aunt June, had made. Lin stated that her mom wanted to donate the ties, along with the other articles of clothing. But Lin wanted to do something with her dad’s ties, as they were too meaningful to discard.

I said that I would investigate “tie memorabilia.” There had to be someone who did this kind of work, this kind of art. The search to find someone who would be able and willing to create a special memory started! I asked family, friends and colleagues to ask others and to keep “the Project” in mind. I asked my seamstress. One and one-half or more years passed and the ties were still in my possession. No connections were made. Mr. Miller’s ties were too meaningful to hand over to someone unknown.

One day in July, 2017 a dear friend and I took a day road trip for a reunion and "the Project" re-surfaced. It turns out, my friend’s sister sews, creates, and more. She was in the throes of a number of family projects. I asked if Jean may consider a tie project. Lee said, “Jean can do anything!” And over the months that followed, Jean and I connected, met, shared, explored,  planned, emailed, talked, and celebrated “the tie project!” Jean respectfully, tenderly, and carefully created four pillows and two table runners in memory of Dad Geo. Miller and his ties. Jean included “his projects signature” and “his emails closing!” Both accents are/were very dear to Lin and her sister. No words can capture and/or describe the emotions, the love, the warmth, the memories, and more, that Lin, her sister and their mother felt upon opening the ties gifts. Jean is a blessing and blessed with gifts and talents. I am forever grateful that “the ties” and I found Jean!      ~ Cathy 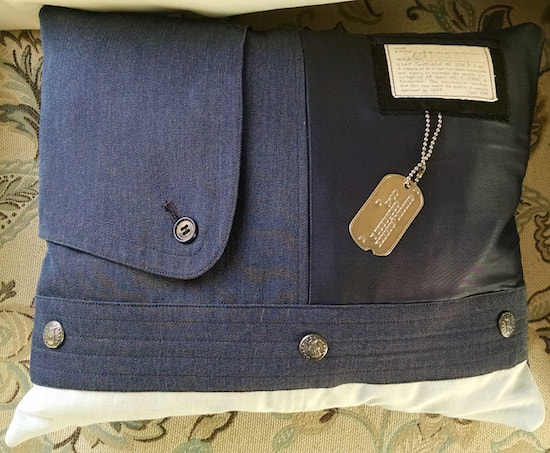 Click on the image to read more.
My grandfather was a career military man and a lifelong man of stories. Some of his stories were set against the backdrop of the Great Depression and growing up poor, while others took place on Air Force bases dotting the U.S. and in the halls of hospitals from South Korea, to Germany, to Lancaster, PA. To his fifteen grandchildren, he was always part man/part myth—but we did not grow up in his shadow. Instead, we learned to play, fight, and love under his and my grandmother's protective shade.

When he died, my grandfather left behind a closet full of dress blues and boxes of badges, pins, nameplates, and dog tags. These were not just pieces of clothing or objects to him, but rather the foundation of the life he created, how he saw the world, and how he wanted the world to see him. My mother wanted to save these things, but knew that they would just gather dust and be forgotten if she kept them in a closet. She enlisted Jean's help to preserve the pieces as pillows and sent her his dress uniform, trench coat, winter trench coat, two dress shirts, and assorted regalia. My mother expected simple patchwork pillows, embellished with a dog tag or two. We were given so much more.

Our whole family was astounded and touched by what Jean created. She crafted ten unique pillows, and each reveals a chapter of who my grandfather was—from his early days in the Korean War to his final rank of Lieutenant Colonel at Langley Air Force Base. One of my favorites shows a complete but worn sleeve of his blue-dress shirt, and I love imagining him buttoning his cuff before going to work for the good of his country and family.

There are many people who can make patchwork pillows or blankets out of old shirts and jackets. What Jean does is something far deeper. She is able to listen to the stories about a person, and then translate the core of who that person is into a comforting and meaningful physical artifact for their family to hold onto. Jean creates time capsules and paints portraits through her work, and she is a storyteller in her own right.    ​  ~Maddie